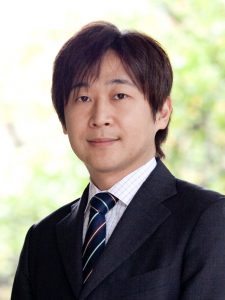 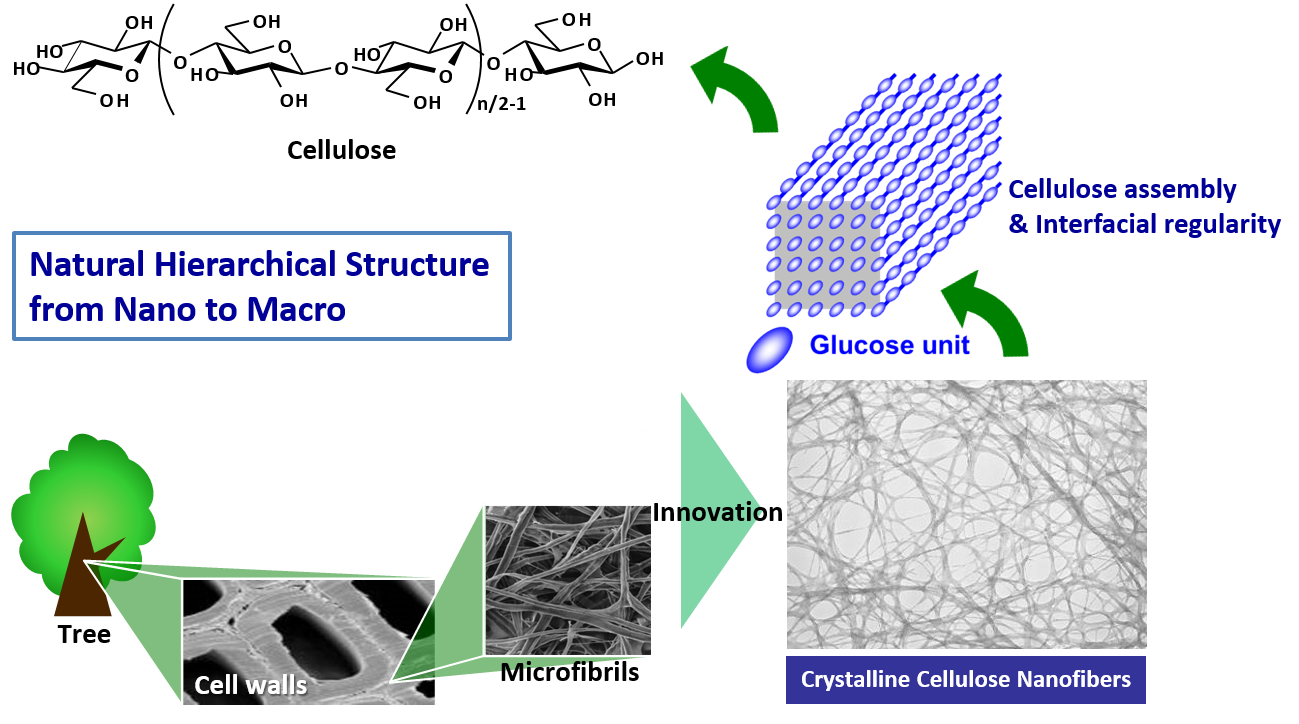 Supramolecular nanoarchitectures of natural structural polysaccharides such as cellulose and chitin have recently attracted much attention as smart nanomaterials from bio- and nanoengineering perspectives. Cellulose (β-1,4-linked D-glucopyranose), which is the main constituent of plant cell walls, is the most abundant and renewable bioresource. Chitin and chitosan are the structural analogues to cellulose, and possess various biological functions. These polysaccharides demonstrate specific unique features for hierarchical organization by self-assembly, resulting in the crystalline nanofiber forms. We have pursued our studies of novel bioadaptive biomaterials for cell & tissue engineering in regenerative medicines, by focusing on the bioadaptive nanoarchitectures of nano-organized polysaccharide nanofibers.

Extracellular matrix (ECM) as a structural and biochemical scaffold to surrounding cells plays significant roles in cell adhesion, proliferation and differentiation in vivo. We have investigated the in vitro cell culture and cellular regulation by using structural nanofibers-based scaffolds, which are composed of surface-modified cellulose and chitin nanofibers. Cellulose is a bioinert material; nevertheless, the surface carboxylation, sulfation (sulfate half-ester) and phosphorylation of cellulose nanofibers can drastically induce the cell attachment and growth for fibroblast-like, hepatocellular and mesenchymal stem cells. Besides, the combination of forest and marine nanofibers can regulate the cell behavior and functions in vitro for advancing regenerative medicines. Rigid nanofiber nanoarchitectures with native crystalline forms and regularly-repeated functional groups would contribute to improving cellular microenvironments in vitro, and would provide potentials for developing bioadaptive cell culture scaffolds having ECM functions. 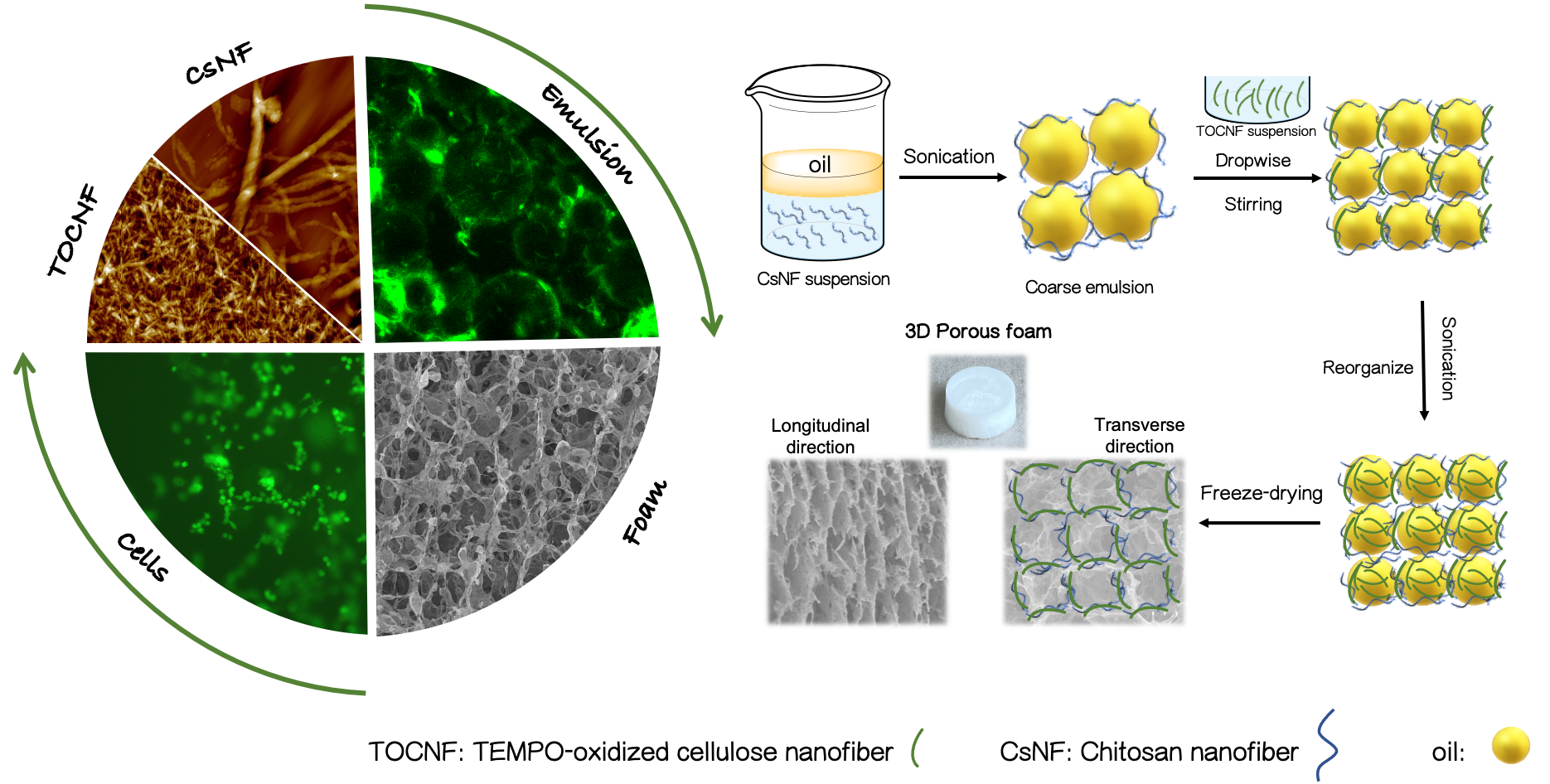 In nature, a variety of bioactive substances exist depending on the survival strategy of each living thing. We have investigated the combination of natural nanofibers and natural substances to find out a new function which is effective for designing cell culture scaffolds. For example, ferulic acid is a typical lignin precursor of trees, and chitosan is a unique polycation found in nature. Unexpectedly, the combination of ferulic acid and chitosan nanofibers can demonstrate the promotion of neural differentiation of human mesenchymal stem cells. A novel approach for surface decoration of glyco-nanomaterials is expected to open up a new phase in the functional design of polysaccharides-based scaffolds as a biointerface material. 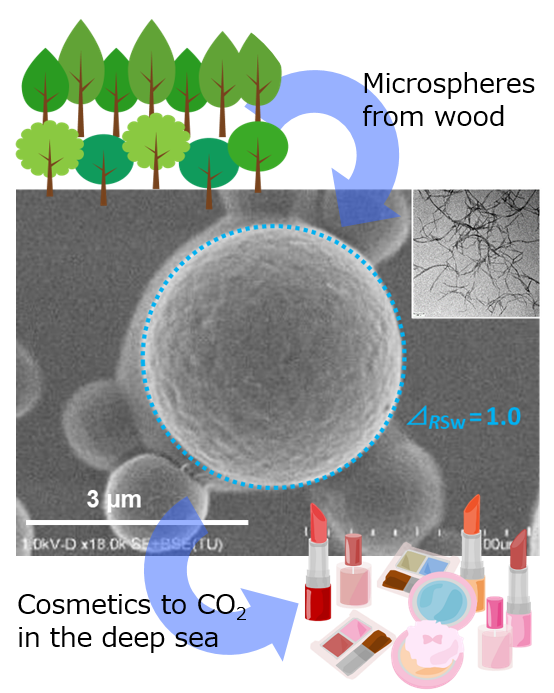 Ecosystems Materialogy is an old but new concept to use natural polysaccharide nanomaterials in carbon-neutral society toward the Sustainable Development Goals (SDGs). Trees in fact absorb a large amount of carbon dioxide to synthesize carbohydrates, and we use carbon-fixed woods in our dairy life. However, to establish the ideal carbon neutrality, we have to use woody materials for longer period than that of forest silviculture. It may be possible for house building, but actual situations for cellulosic nanomaterials must be further considered.

We have aggressively investigated the long-term uses of polysaccharide nanomaterials in ecosystems, and organocatalytic applications of crystalline polysaccharide nanofibers. Both approaches aim at the true carbon-neutral and carbon-negative systems from the viewpoints of ecosystems-mediated materials circulation.

Natural nano-organized polysaccharides such as cellulose nanofibers have a diverse array of structural characteristics at the nanoscale that can never be artificially reconstructed, and we have to find out the unrivaled functions both from tangible and intangible aspects. For example, if cellulosic nanomaterials after use are flowing into rivers and then sedimented at the bottom of deep sea, very long term carbon fixation may be achieved during gradual biodegradation in the sea, while the generated carbon dioxide is captured by the deep ocean water. At this stage, this concept may not be accepted in public, but we have to continue considering the ideal situation, ideal future and ideal SDGs world. 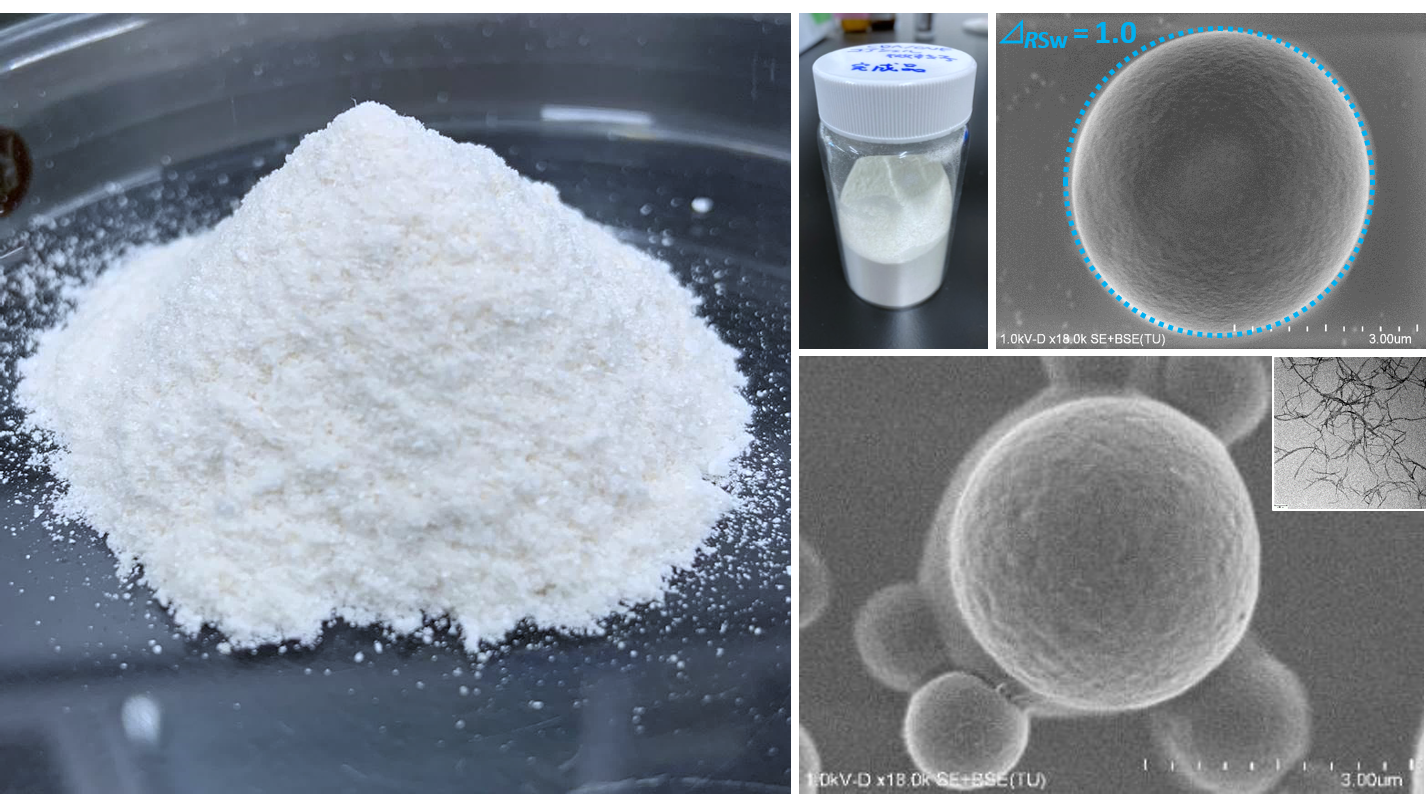 In recent, various microplastics, especially primary ones such as cosmetic microbeads, have afforded severe impacts on marine environments. We have investigated the fabrication of spherical micro-particles with cellulose nanofibers and cellulose derivatives via Pickering emulsion templating. Besides, various lignin precursors such as coniferyl alcohol, eugenol and isoeugenol are emulsified using polysaccharide nanofibers as sold surfactants, and enzyme-mediated radical polymerization can synthesize unique core–shell microspheres with high biodegradability in the sea. Wood-derived microspheres are expected as a promising green alternative to fossil resource-derived, non-biodegradable microbeads in cosmetic applications. 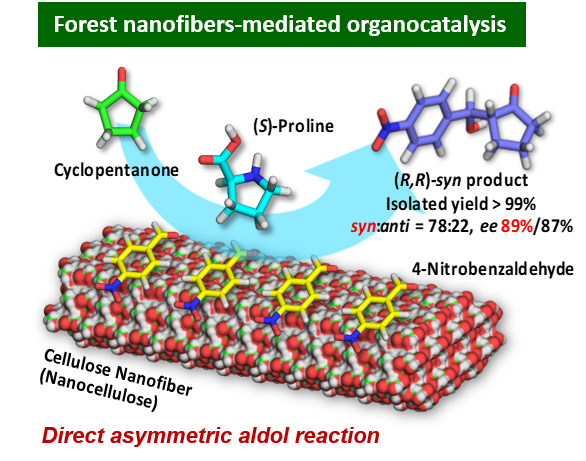 Cellulose nanofibers obtained from wood pulp by TEMPO-mediated oxidation possess regular chiral interface, and act as a chiral enhancer in direct aldol reactions of 4-nitrobenzaldehyde and cyclopentanone with (S)-proline as an organocatalyst. Cellulose nanofiber itself is catalytically inactive; nevertheless, nanocellulose can enrich the (R,R)-enantiomer in this reaction, affording 89% ee in the syn form with a very high yield (99%). Nanocellulose-free (S)-proline catalysis shows poor selectivity (64% ee, syn form) with a low yield (18%). Therefore, we have investigated to expand the possibility of various nano-organized polysaccharides for green organocatalysis occurring on their solid surfaces bearing regularly aligned chiral carbons on hydrophobic crystalline facets. Our novel strategy will provide new insight into asymmetric synthesis strategies for interfacial catalysis. 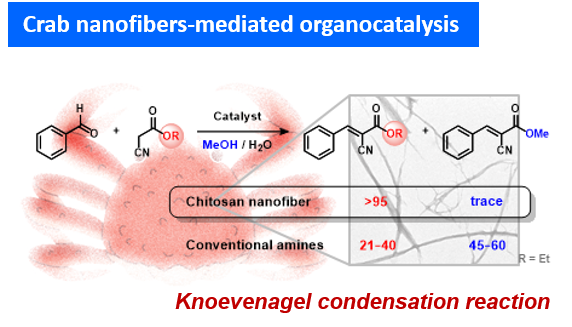 Chitin and chitosan are the most popular marine biomass, and have various unique activities. Chitosan nanofibers (CsNFs)-catalyzed Knoevenagel reaction in green solvent has been achieved in our work. CsNFs can catalyze the desired C–C bond formations in high yield with high selectivity, while conventional small-molecule amines inevitably promote transesterification to produce a large amount of solvolysis byproducts. The unique nanoarchitecture, in which chitosan molecules are bundled to ensure the high accessibility of substrates to catalytic sites, is a key factor to enhance the highly efficient Knoevenagel condensation. Our trial is effective for the product recovery in high purity without solvent-consuming purification, because the CsNF catalyst can be easily removed from the reaction solvents. Our strategy highlights a novel and promising function of marine nanomaterials in green catalysis as emerging polysaccharide-based nanofibers. 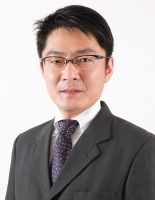 Fungi inhabit a broad range of environments and this has arisen because of their diverse secondary metabolic systems that enable these species to survive in unique environments. We are focusing on metabolic diversity of fungi and working on fungal biotechnology. P450s constitute a large superfamily of heme-containing monooxygenases, distributed in a wide variety of organisms. In addition to biological roles of P450s, utilization of their catalytic functions is of great interest in the biotechnology sector. Biocatalytic regio- and stereo-specific oxidations by P450s attract much attention in industry because (i) use of biocatalysts allows reduction in the number of tedious steps such as blocking and deblocking that are common in conventional chemical synthesis, (ii) a single product without by-product formation reduces the cost of downstream purification steps, and (iii) enantiomeric mixtures (rather than racemic mixtures) are strictly required in some fields such as the pharmaceutical industry. We are working on biotechnology with fungal P450s. Basidiomycetes produce various terpenoids and their relevance for pharmaceutical and agricultural applications and understanding their biosynthetic machinery to produce these secondary metabolites have attracted significant interest. Biochemical studies on terpene metabolism have established a general scheme: naturally occurring terpenoids are produced by concomitant actions of both terpene synthase and terpene-decoration enzymes, such as cytochrome P450. We are working on biotechnology with fungal terpene synthases.